According to KPN customer support, this is a known problem, but there doesn't seem to be a fix.

A letter was sent from KPN on 11th February to me, stating that I had to change my email password because it had been hacked (letter was authentic, included my account number, names & address details). I was outside the NL at the time and did not receive the letter before I received an email from KPN on 15th February stating that I had still not changed my password. I do not change passwords ever via email (link) request and wanted first to wait to verify with KPN what was going on, once I was back in the NL. Before I could call, I noticed that my email account had been blocked.

So, I called customer service to unblock it and the guy I spoke with talked me through changing my email password while unblocking my account.

When changing my email password I noticed that I now had to create a password containing a special character - so, just added 3 'dollar signs' to the end of my original password.

I checked that I had updated everything correctly but when I went to pick up/send new email, I received the Outlook error saying that the settings on one of my email addresses was no longer correct. It was showing on the main KPN account email address that I do not actually use for email correspondence, but which I have listed as an email address in my Outlook account.

Today I called KPN customer service and after having been told to 'call Outlook, because this is not a KPN problem', I just called back and managed to get through to another Customer Service person who was more willing to assist me. He told a different story. It was a known problem. If you (have to) update your KPN email password, you now have to include a special character. Microsoft doesn't accept this character and this is why an error box is presented, linked to the main email address. So what is the solution, I asked? The guy said that he had spoken with several customers recently with the same problem and who had also already contacted Microsoft. He said that he did not think that there was a solution. He told me to start using Gmail to solve the problem.

I have also called Microsoft today but the (very Level 1) girl on the phone had not heard of the problem. She said that I should switch to Office 365 as the support for Office 2010 was soon ending. She tried to sell me the latest version, but she admitted that she didn't think (i.e. was not sure) if I could use my kpnmail email addresses anymore with the newest version of Outlook.

The problem is not so dramatic, I can live with it but it is just the irritating error boxes (2, in duplicate each time) appearing everytime my email is refreshed. I can click them away but it's driving me crazy. I removed this main email address (to which the errors are referring) from my Outlook account (as I said, I do not actually use this email address), but it makes no difference. Microsoft is obviously just sending the error messages to the main registered KPN email account.

Anyone know anything about this, or maybe a solution? I have a feeling that the info I have so far received from KPN/Microsoft customer supports is not complete or wholly accurate.

P.s. sorry for writing in English, but technical Dutch is not my strongest..
icon

Erik & Dennis, thanks for all the help. Since getting a reply from the Abuse department yesterday that they had lifted all restrictions, the Outlook errors have today finally disappeared. So, all looking good now..

+28
Hey AngloDutch, welcome! Just to confirm that indeed the letter was genuine. When we see that an account has been compromised because the password has gotten out, we send out the warning. And if there's no password change within the allotted time, we block. Which we can then unblock as soon as the password has been changed.

Now, the special characters. I've not personally heard this before, but a quick check on Google does seem to indicate that Outlook has a problem with certain special characters. To be frank, that is not something that we, as KPN, can help with. Outlook is not our product. However, here on the forum we do try to be of as much assistance as we can.

In this case, if you would like to continue using Outlook, I suggest trying different special characters in your password. Maybe a more 'common' special character, such as !, might work with Outlook.
The shortest answer is doing -George Herbert
A

I have done as you advised.

Strangely, when I went into my account dashboard to change the email password, there was no requirement to create a password containing special characters. I have no idea why the support rep said that this had to be included. I have now altered my password and have excluded any special characters. The change was accepted and I have updated all my email addresses in Outlook to reflect the new password.

Unfortunately the same error (on the main email account address ) is still appearing.

I will have to look into this further. I still have no idea why this is happening!

+28
Good to hear the changing of the password was succesful. I'm gonna take a look, with you, at your settings and see if we can find out where it's tripping up. Can you fill in your forum profile with postal code and house number, and add the main e-mail account to the field 'Persoonlijke opmerking'. All these fields are private, so only visible to you and me.

Can you also post here a screenshot of the e-mail settings in Outlook? Make sure you blur out (or temporarily remove when you take the screenshot) your actual e-mail address because of privacy.

Generally speaking, as long as you can set up the e-mail settings in an e-mail program, then you can use it with your KPN mail adresses. Outlook 2016 and 2019, for example, you can use. If you would like a free alternative, Mozilla Thunderbird is a good one.
The shortest answer is doing -George Herbert
A 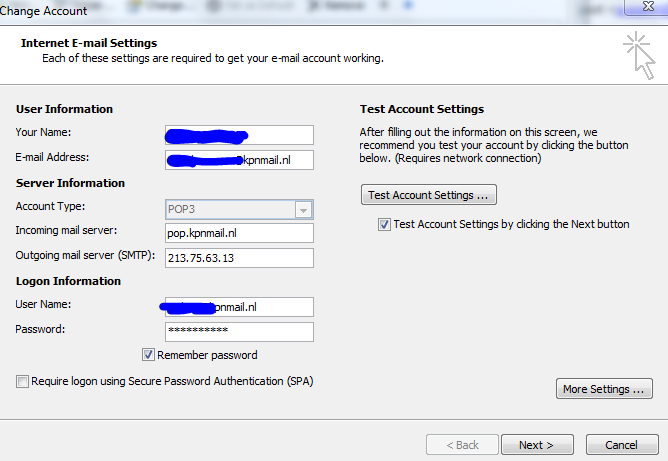 Above is a screenshot of the settings of one of my email addresses. This is not the main account email address (as I said, I don't use that for correspondence).

SMTP server was switched from mail.kpnmail.nl to 213.75.63.13. This due to rejection of mail forwarding when going through my VPN. At the time of the problem, I was advised by my VPN support, 'it might be that kpn have some geo requirement, try replacing mail.kpnmail.nl with 213.75.63.13.....'. So, I am now using 'split tunnel' for mail. 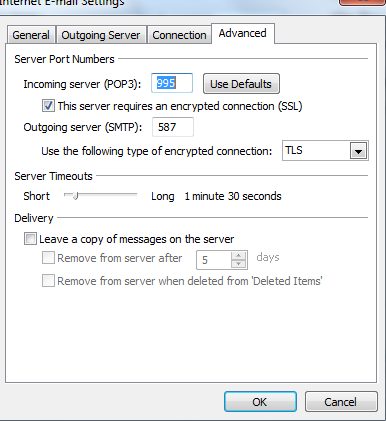 Here above are the advanced settings.

Outgoing Server is set to 587 just on this email address, as advised by my VPN support

On my other email address settings, the server port numbers are set to 110 (POP3) and 25 (SMTP)

I have also updated my profile as you advised, Erik.

+28
First thing that jumps out at me is the smtp-address and the mention of the VPN. Is this the only e-mail that you use through a VPN? Can you check if it works without the VPN, both with the IP address and with the regular smtp.kpnmail.nl?

Under the advanced settings, what other options do you have for the encryption? If you have STARTL or SSL there, can you try those for me?

Generally speaking, the smtp.kpnmail.nl should just work, VPN or not. And, which username you fill in doesn't really matter. You can use either the main account address, or any of the aliases underneath that address. They all refer back to the same inbox.
The shortest answer is doing -George Herbert
A

Yes, I use all the aliases also through VPN when I have it active.

I haven't had my VPN active for several weeks now, so it is occurring even though VPN is deactivated

The options that I have for encryption:
None - SSL - TLS - Auto

If I change the encryption:

Changing TLS to SSL (nothing else being changed):

Changing TLS to SSL (including SMTP to mail.kpnmail.nl) - same test error as directly above: 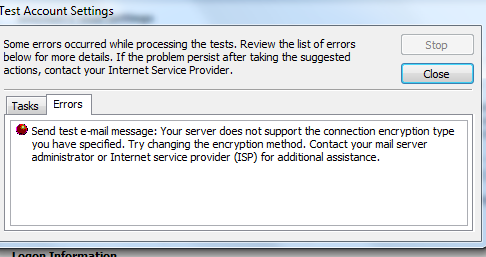 But as I previously mentioned, I have not changed any of these Outlook settings since altering my password. I am therefore not sure that this error now coming from Outlook has to do with any of these settings, as they have of course remained the same during the password changes.

+28
Thanks for testing. So it seems that TSL is the setting to use for your machine.

I also suddenly realised something and that is that you're still blocked. When we block you as a result of the letter, you don't automatically get unblocked. You actively have to contact our abuse department. I should have realised this immediately, my apologies for the delay.

What you need to do is send an e-mail to abuse@kpn.com. Let them know that you changed your password in reaction to the letter and ask them to unblock you. Should be fixed withing 24 hours then. You can e-mail them from the webmail.
The shortest answer is doing -George Herbert
A

OK, Erik, I thought that Support had unblocked me, as I do have access to webmail, etc. But I will contact the abuse department as well. Thanks again.

+28
The blocking is not on accessing the mail, but on being able to send it. Customer service does not have the ability to unblock, only the abuse department can do so. I somehow overlooked that and forgot to double check whether the block had been lifted.
The shortest answer is doing -George Herbert

+7
There's different types of blockages. We automatically block on a number of triggers, which just blocks outgoing email through authenticated SMTP. This block is not automatically lifted but has to be done through us.

The "block" as mentioned in the letter wasn't really a block but just a forced password reset. Obviously this affects incoming mail as well but can be fixed by simply setting a new password.

As for your settings, I can advise you to use mail.kpnmail.nl and not the IP. If we make changes in the background, it'll break your mail settings when using the IP. Since it's the same machine, the same rules apply anyway so it shouldn't affect anything usually.

VPN can give issues with our mail platform in some cases. VPN IP's are usually shared, so if there's abuse by someone, it can affect multiple customers on the same VPN service. We noticed this a few times already with NordVPN. In those cases there's very little that can be done, other than disable your VPN.
A

Erik & Dennis, thanks for all the help. Since getting a reply from the Abuse department yesterday that they had lifted all restrictions, the Outlook errors have today finally disappeared. So, all looking good now..

Thanks, Dennis, for giving some extra background info